There are many skills in life that one must simply learn through doing. One of those, I think, is the use of money; anticipation, decision-making and understanding of the different ‘variables’ in a household’s financial matters.

I learned personal financing in one particular way; you may probably go through another kind of path. It’s always a personal venture; and certainly there probably is no “Silver bullet” or magical recipes how to get rich, even though the Internet and the world in general is full of those who promise these kind of miracle methods. Finance can seldom be externalized – it has to be experienced. Personal finance management is like any “game”: knowing the rules, knowing the methods, and then: hard practise. That’s the way that will most likely give good results. Once you know how to play, your next goal is to become better; make saving plans and stick to them. If you fail, use hard data to analyze and point out what happened.

In practical terms personal finance is influenced very strongly by the psychology of money and the psychology of the money user: You.  Things like affinity for luxury, status and other hedonistic aspects can be a strong guide; I think these kind of things can be positive or negative. Striving for luxury and materialistic good is not problematic at all, unless you try to achieve things the wrong way; too fast, with unsound (immoral) ways that do not hold to the scrutiny, or if you’re going in a head-first dive into completely unknown waters and with no idea of what can happen.

I was really interested in money already at around age 10. Back then I had a Commodore 64 home Computer and Basic as programming language. Later on with a PC and EGA/VGA Graphics I programmed one of the earliest experiments in personal finance management software using QuickBasic. The program tracked income and expenditure and gave both textual and graphical output of the data. All data was entered manually into the program source code itself; this was customary back in those “Basic-times”.

Finland seems to lack a decent budgeting system a’la Mint. There was one very aspiring attempt to bring such a system into household use, called Balancion. Currently as of April 2014 we’re actually on the verge of perhaps seeing the second coming of this solution; time will tell. In the meantime, I devised my own system, once again. Now it’s based on Excel. The main idea is that everything is thought out one month at a time. There are three similar calendar boxes, whose cells contain the information (financial transactions) for that day: be it income or expenditure. Furthermore, the system contains aspects for both making projections and tracking real transaction information. 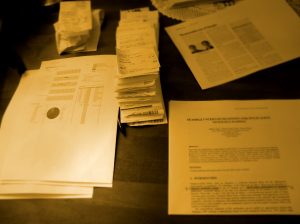 I believe in applying well-known methods of microeconomics to personal finance. Basically, we as consumers and families, are quite much like companies; we have needs which are covered by spending (using money); we have incomes, and we have possibility to make investments, either with our own money-at-hand or with loans. I’ve often heard a difference cited between companies and people: people wouldn’t strive for profits. It might be. Maybe not everyone tries to get rich, or even get well-off. But I think in modern world it would be quite risky to completely rely on the altruism of others – be it the government or individuals. I think everyone should at least consider making a financial plan where the sole source of personal happiness is oneself; not any external force.